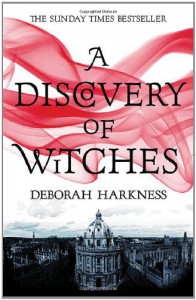 Why is it that every book I pick up that contains a vampire, their main characteristic trait is over protectiveness of a female character, that it becomes borderline stalker/possessive?

I'm half way through, and even though this is the second time I'm reading it, I'm still annoyed by authors who think it's okay to cast your females love interest as an over bearing vampire. Who thinks because she is a woman she not only needs a man in her life to save her, but a strong vampire is just a bonus.

I mean, he's lived for hundreds of years, he has an abundance of life experience. Obviously not when it comes to the modern woman.

For once I would love to read a male vampire character who doesn't think that the female needs him 24/7, but instead actually ask her if she needs help. I'm sure she is more than capable on putting on her shoes....just saying.

At the moment Diana is showing her independent side, not letting Matthew take over her life. But like every other vampire novel I've read (except Dracula by Bram Stoker), it will probably all change soon and she'll be yet another weak female character.

Other than that, I'm actually enjoying the book. Being a history nerd this book is definitely up my alley.